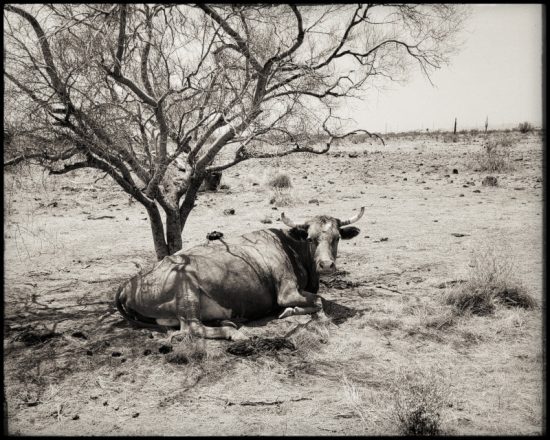 It’s that time again. And when I say “that time again,” I realize that a) it’s been 2 and a half years since the last one, and b) it’s July and not November. So what gives?

LoCreShiMo, that’s what. It don’t care, it just wants your soul. It doesn’t have to be an annual thing, or even a thing that happens at a scheduled time. It does whatever it wants.

r last time, I opened with a black and white photo of an old barbed wire fence. That’s not actually true, I opened with a written piece. But the first PHOTO I submitted was the fence. I wanted to stick with the western theme for my opening this year, and thus – the cow.

There’s a large section of open property that has been used on and off as a cow range for years. This area is also used by several hot air balloon companies to land after giving their rides. As the area becomes more developed, not only do the balloon companies have a harder time finding space to land, but the cattle have less space to roam.

When the balloon pickup crews drive out to the landing sites, they don’t always close the gates behind them, which poses a risk for escaping cows. Additionally, some of the landing balloons were seen as enough of a hazard that the property owner has now forbidden access to anyone other than the cattle owners.

I was given the lucky job of driving around the property to find the access gates and hang the no trespassing signs. It was hot, and I had to do a lot of backtracking after finding several dead ends, but I also got to see a few of the cows, and even a mule.

Overall impression: I’m glad that I’m not a rancher in Arizona.