It’s been a long time since I’ve done any legitimate artwork. So when my sister asked how rusty my skills were, to design a tattoo we’d been talking about getting, I was understandably a bit hesitant.

We’ve talked about getting matching tattoos for quite a while, and every time she visits, she jokes about how we should just go down to a local shop and get one. Now, I like tattoos, but the last time I did something on a whim like that was when I was in the military, back in 1996 or so. Needless to say, it’s not a great tattoo.

The follow up question to the joking is of course, “so what should we get?” A lot of brainstorming and web image searching usually comes next, and finally we resolve to “think about it, and come up with something for next time.” That never really happens, and we repeat the process over again the next visit.

My sister is going to be visiting soon, and this time, she reached out ahead of time, poking at the tattoo idea. I thought back to where we’d left off, and what our last ideas had been. Yin Yang. Meh. So I poo-pooed that idea. She came back at me with a sun and moon combination, and sent me a few images. While the image she sent was really quite fantastic, I wasn’t wholly sold on that idea either.

One thing I’ve been thinking about getting for a while, is a Yggdrasil, or Tree of Life. So I proposed a tree idea to her. She accepted, and so began the web image search process again. 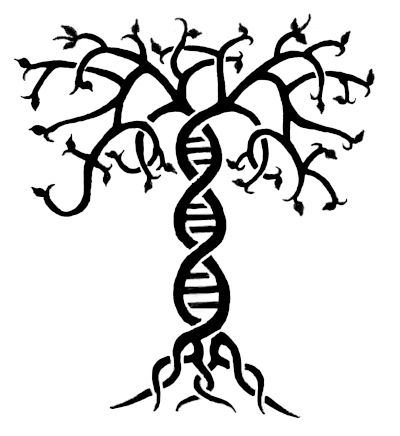 I can never quite decide on the artistic style of the tattoos I want to get. I always default to Celtic or tribal, but then I have a hard time actually finding one of my subject that fits those design parameters. For this particular design, I also wanted to keep it simple enough that it wouldn’t take several hours out of her visit. I also didn’t want to just copy something off of the web for this one, but actually have an original piece.

When looking at various Celtic tree images, I noticed that some of the designs were actually two or three trees that were forming the knot, instead of just a stylized tree trunk. That got me thinking about doing a design with two trees, one for each of us. A couple of searches for twisting tree trunks turned up yet another idea, that of the DNA tree. I instantly fell in love with that concept.

I sent a few pictures to my sister, each of them with one piece of the concept I was trying to go for, and she totally went for it. My original intent was to take a couple of idea images to the tattoo artist, and then have them draw something up for us. But after sending those sample designs to my sister, she kind of called me out, apparently intending for us to do the design instead. That led me to pulling out a piece of paper and a pencil, and doing something I hadn’t done in years – sketching.

I’d put something down on paper, send it to her, and she’d come back with edits and suggestions. We went back and forth like this a few times. Coming up with the trunk was the easiest part, though the connecting strands did end up going through a couple of revisions. The roots also ended up having minimal edits. It was the branches that gave me the most trouble.

Since my original drawing was a line sketch, and I wanted a solid black piece, I colored in the sketch that I thought was more or less finished. And it looked like Medusa. Not really what I was going for. So I erased all of the leaves, and toyed with a couple of different ideas, but nothing that totally worked. Then my sister, who had also decided to start sketching ideas, sent me her leaf design, which ultimately led to the finished product.

The actual piece is about 6″ tall, and 6″ wide at the branches. I may end up having it enlarged just a tad, since it’ll be going on my forearm, and I’d like for it to have good coverage.