In November of 2015, I participated in NaNoWriMo for the first time. It was something I’d been meaning to do for years, but continually found reasons to put off, and finally decided to step up to.

Surprisingly, I not only completed, but exceeded it. Okay, that’s not entirely true. In terms of the word goal for the month, I “won,” but it did take me an additional week or two to actually complete the book, which ended up somewhere around 60k words. Keep in mind, this was a very, very rough draft. Having never written anywhere near that many words for one story before, it was a learning lesson, and a lot of it was just a frantic attempt to meet the goal.

At best, the original construct could have been a short story, so turning it into a novel was a optimistic undertaking. A lot of new material had to be generated, most of it on the fly. This resulted in a lot of content that didn’t have anything to do with the original concept. But that’s how stories evolve, right?

The idea for this book was first conceived almost 20 years ago, and developed through the course of RPG sessions with my friend, John Harper. After that, it collected dust, and every now and then would glimmer at me in hopes of becoming something more. It got to a point where I actively didn’t want to write it, because of how I’d built it up in my head.

Well, I finally did.

I probably would have thrown it all away, but my editor, Megan Anderson, convinced me that it had hope. With her extensive corrections and suggestions, I’m currently re-writing it, with the eventual goal of putting it into print.

In an any case, I thought I’d post the prologue, in hopes of generating some kind of accountability for myself. 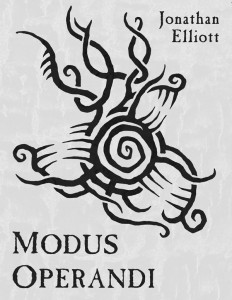 The stillness of the forest is disrupted as a man crashes violently through the undergrowth. His eyes are wild, shifting frantically to take in his surroundings, but never really registering them. His breath is rapid, panicked, and the feeling of something chasing him cannot be shaken. He trips, sprawling to the ground, churning up the leaves and wet soil as he lands. He lies only briefly, not sure whether to pause and catch his breath, to assess any possible damage to his body, or to rush onward, trying even harder to escape the pursuer he cannot define or understand.

Deciding on the latter, he pushes himself to his feet, knees protesting, aching, his lungs on fire. He no longer even comprehends his location or orientation, guessing wildly at his direction for escape. Stumbling again, he careens off of a tree, his breath being forced from his lungs by the impact. Light flashes behind his eyes, threatening to drive him into unconsciousness. He pauses, shakes his head, and for one brief moment glimpses a clarity of the last few days that had been eluding him.

But it flees, and once again the fear catches him. One foot pounding after another, he runs onward. He heeds nothing, no sounds, no creatures, no scenery, so great is his desire to simply escape.

Eventually, he bursts through a wall of trees and brush, emerging into a scene that snaps his mind back into a different world–the world he once knew as his own. Red and blue lights flash, a row of black and white vehicles, contrasted by several black SUV’s, and far too many people in uniforms for him to count. Their heads turn, surprised by his sudden appearance. Several weapons are drawn, aiming directly at him, and he skids to a halt. He scans their faces wildly, searching them for anyone familiar, but finding none. Then it comes back to him again, that this is where he needed to be, the end goal he had decided upon, but not like this, not the target.

Exhausted, and knowing he is trapped with no other options, he falls to his knees and screams.

This article has 2 Comments